We’re huge fans of a gingersnap crust—especially when there’s caramel involved. But if you’re not a fan of the spiced cookie, graham crackers would work well too. 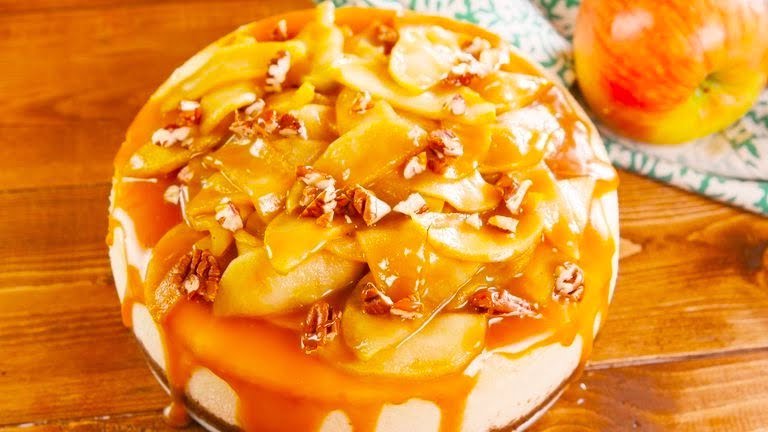 Preheat oven to 325° and grease an 8″ or 9″ springform pan with cooking spray. In a large bowl, mix together gingersnaps, sugar, butter, and salt.
Press mixture into prepared pan and ⅓ up sides, packing tightly.

In a large bowl using a hand mixer beat cream cheese and sugars until no lumps remain. Add eggs, one at a time, then stir in sour cream and vanilla. Add flour and salt and beat until just combined, then pour mixture over crust.
Wrap bottom of pan in aluminum foil and place in a large roasting pan. Place in oven then pour boiling water in roasting pan about halfway up sides of springform pan. Bake until center of cheesecake only slightly jiggles, about 1 hour 30 minutes. Turn off heat, prop open oven door, and let cheesecake cool in oven, 1 hour.
Remove foil and refrigerate cheesecake for at least 5 hours and up to overnight.

In a large skillet over medium high heat, bring apple cider, brown sugar, and cinnamon to a boil. Cook until slightly thickened and reduced by almost half. Stir in butter, then add apples and salt cook, stirring occasionally, until soft and syrupy, about 5 minutes. Let cool slightly.
Spoon apple mixture over cooled cheesecake then drizzle caramel on top and sprinkle with chopped pecans.