Though it will be hard, try to resist adding a ton of pudding in between the layers. Otherwise, things will get pretty messy. If that means there’s extra pudding left over, so be it. We know you’ll find some use for it. 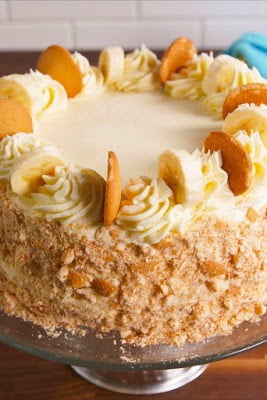 Make cake: Preheat oven to 350°. Line two round 9″ cake pans with parchment paper and grease with cooking spray. Prepare cake mix according to package instructions. Divide batter between cake pans and bake until a toothpick inserted into the center comes out clean, 25 to 30 minutes. Let cakes cool for 10 minutes in pans then invert onto wire racks to cool completely.
Make pudding: In a large bowl, combine pudding mix and milk and stir until thickened, about 5 minutes. Fold in Cool Whip.
Make buttercream frosting: In a large bowl using a hand mixer, combine butter, 3 cups powdered sugar, vanilla, and salt. Beat until light and fluffy. Add remaining sugar and heavy cream and beat until smooth.
Assemble cake: Using a serrated knife, cut off the rounded top of each cake to level. Top one cake with a layer of pudding then top with most of the banana slices (reserve some for garnish). Place second cake on top and frost entire cake with buttercream, reserving about 1 cup to pipe on top. Press crushed Nilla wafers around the sides of the cake.
Transfer remaining buttercream to a piping bag fitted with a large star tip and pipe large swirls around the top of the cake. Decorate with Nilla wafers and more banana slices.